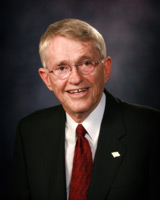 MEMPHIS, Tennessee—Hookers, drugs, dirty carpet. These are words that make many hoteliers squeamish.

But not Jack DeBoer.

DeBoer, the father of the hotel industry’s extended-stay segment, addressed those subjects and more last week while being honored at the ninth annual Southern Lodging Summit, where he gave a luncheon keynote address.

DeBoer has launched four extended-stay brands during his 45-plus years in the hotel industry—which he entered after a successful but rocky run in the apartment business. Residence Inn, Summerfield Suites and Candlewood Suites each have DeBoer’s fingerprints all over them. So does his current product, Value Place, which DeBoer admits might be more like an apartment building than a hotel.
“My sense is we’re more apartment than we are hotel,” DeBoer said during an interview held at the Peabody Hotel in Memphis. “We perhaps have the operating numbers of a hotel, but we have the operating model of an apartment, and I like that, the apartment operating model, because there’s such favorable financing out there through (the United States Department of Housing and Urban Development) and all these other things.”

The minimum stay at Value Place is seven days, and the average length of stay is about 70 days, according to DeBoer. There are 171 properties open with four under construction. The CEO of Value Place said the product has attracted apartment builders and hotel developers.

Value Place has been hit hard by the downturn in the construction industry, which at one time represented about 35% of its business. It now relies more on what DeBoer calls the “local churn.”

“There was more churn in the local and the construction workers of course are in a depression—they’re not in a recession,” he said. “There’s 27% unemployment in that part of the economy.” Value Place does not allow properties to sell nightly rooms—it’s a one-week minimum buy. That helps maintain the pure extended-stay model, DeBoer said.

Under the microscope
The product is under more scrutiny than ever with law enforcement officials focusing on stopping prostitution and methamphetamine labs—both of which have found homes at extended-stay hotels over the years.

To answer the skeptics, Value Place approaches local police departments early in the development process to explain what the company stands for. It regularly offers the local police a couple of rooms for young officers to call home for short periods. The company brings in drug-sniffing dogs.

Cleanliness also is important. Carpets are shampooed after each guest moves out. “In a Value Place, because there is no eye candy, we have to be extraordinarily clean,” DeBoer said. “It’s a little hard for a hotelier to understand that we are crazy clean.”

Some good news ahead
DeBoer isn’t optimistic the hotel industry will see exceptional performances any time soon—mostly because of supply added during the past 10 years.

“2007 was the absolute end of the lodging business as we know it from the developer standpoint,” he said. “We have an industry where everything in the middle is a commodity because it’s like sugar—you can’t make your sugar any sweeter. There’s five other great run, happy front desk, clean room, great hotels on that corner.

“When the economy’s good, you think you’re the smartest guy in the world. And when the economy’s bad, there’s nothing you can do about it,” he added. “And I happen to believe that the economy is not going to be back to where it was. The banks are not going to go back to the crazy things they did to allow 265,000 rooms to be built in 2008, which is insane. We’re already under-demolished. So the industry … is in a very tough place.

But there is a hint of optimism for DeBoer. “Going forward, probably the good news is that nobody’s going to build a lot more rooms, because they’re not going to be able to get the number.”